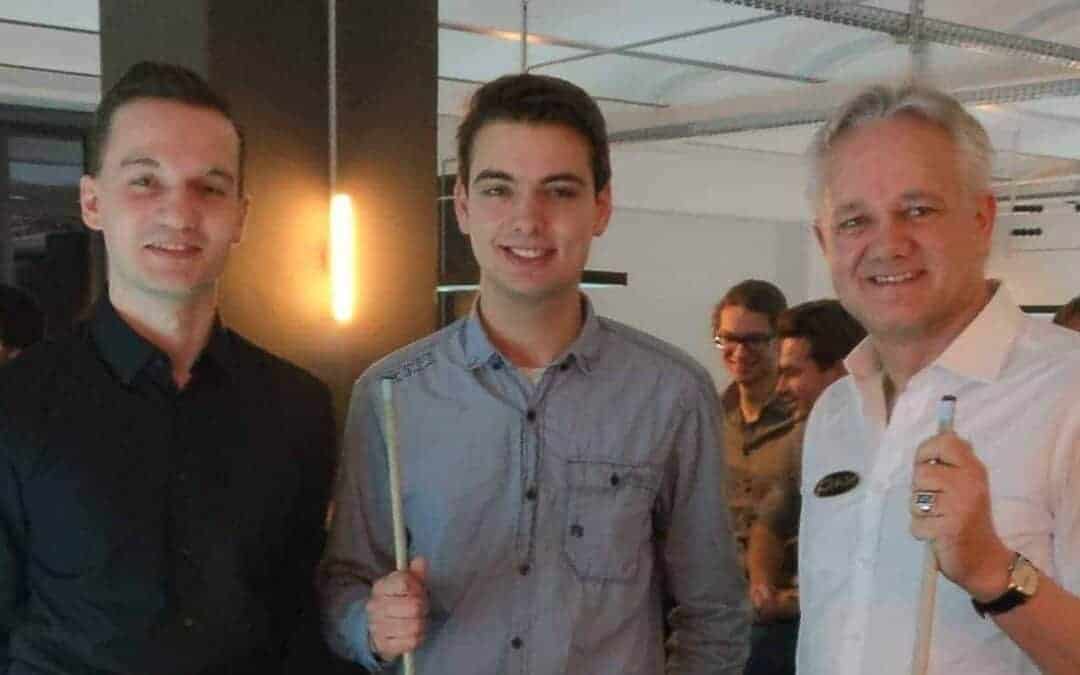 Straight Pool is a difficult game. The Diamond 10ft table at Bata Bar & Billiards is a difficut table. If you put both together, even two of the best players in Germany struggle. At our first 10ft Straight Pool Shootout at Bata Bar & Billiards the reigning German Champion Andre Lackner clashed with Bata House Pro and German pool legend Ralph Eckert in a racte to 200 for 500 Euros, winner takes all. The initiative for this match came from internationally known theater and opera director Michael Thalheimer, who wanted to see his coach Ralph in action finally.

About 50 spectators joined the fun at the Bata to watch this epic battle. And it was nobody else than Marcel Eckardt, Snooker Main Tour referee, who acted as referee, calm and confident as ever. More than 75 people tuned into our Youtube live stream simultanously which made us very happy. We’ll never complain about small glitches in live streams again, since now we know how difficult it is to set one up ourselves… By the way, here’s the replay of the match. The length of more than 4 hours hints at how close the match was.

The match started rather slow. Both players preferred safety play over risk and made a couple of mistakes that you wouldn’t expect from players of their calibre. Especially Ralph didn’t get a foot on the ground, was barely at the table in the first ten innings and, as a consequence, trailed by 50 balls at 29:79. But the 10ft hurts everybody, even Andre (you just can’t slip on that baby!), so Ralph patiently nibbled on Andre’s lead until both players were tied again at 101:101 in the 26th inning. Those who are strong at maths will calculate an average of slightly below 4 balls per inning, which is way below what the players expected of themselves.

Luckily, both players decided to get rid of their nervousness and just play pool for a bit. And even if we didn’t see very high runs, there were plenty of long tough shots, combination shots, creative pattern play and some tight safety play to be seen. Especially Ralph quickened his pace, which made him more relaxed and gained him some quick points, but also lead to a couple of position errors, which forced him to play safe and which also led to three difficult break shots in a row, which he all missed. At the same time, Andre scored consistently with his superb technique and his rhythm like a clockwork; but at the same made some easy mistakes in between. High runs of 35, 29 and 25 showed that he can play on a 10ft, too (and at the same time he left room for improvement). On the other hand, Ralph’s runs always stopped short of 20 (high run: 19), which was way below the expectations of the audience (and even more below his own). He’s holding the high-run record of 98 on our 10ft; the 100 hasn’t fallen yet.

However, after the tie at 101:101 Andre gained and extended a lead again, which he defended until the end for a final score of 200:159 after more than four hours of play. The second half of his 100 balls he shot in 9 innings, which is quite a good number on this table.

Bottom line: Show matches at the Bata work out fine, the 10ft is a beast, and both players can do better. The rematch has been discussed already, and some challenges from abroad have been expressed already, too. Keep ’em coming!